Wondering what to do in Kyrgyzstan? Add these items to your bucket list.

There’s nothing like traveling to a place that’s singularly unique. It’s refreshing to see something new and step outside your comfort zone — that’s why we travel.

For people living in the U.S., Kyrgyzstan isn’t high up on the must-see list, and that’s mainly because we’re not told about all the amazing things to do there.

Our Instagram feeds are flooded with pictures of Cinque Terre or Bali (been to both places and they’re awesome) but it’s not often we see someone “living the dream” in Kyrgyzstan.

That’s why I’m so proud to be part of campaign that shares some of the beauty of Central Asia and inspires you to plan your first visit.

My trip to Kyrgyzstan was one I’ll never forget, filled with bucket list experiences.

If you’re wondering what to do in Kyrgyzstan, here are 12 fun activities to add to your itinerary. 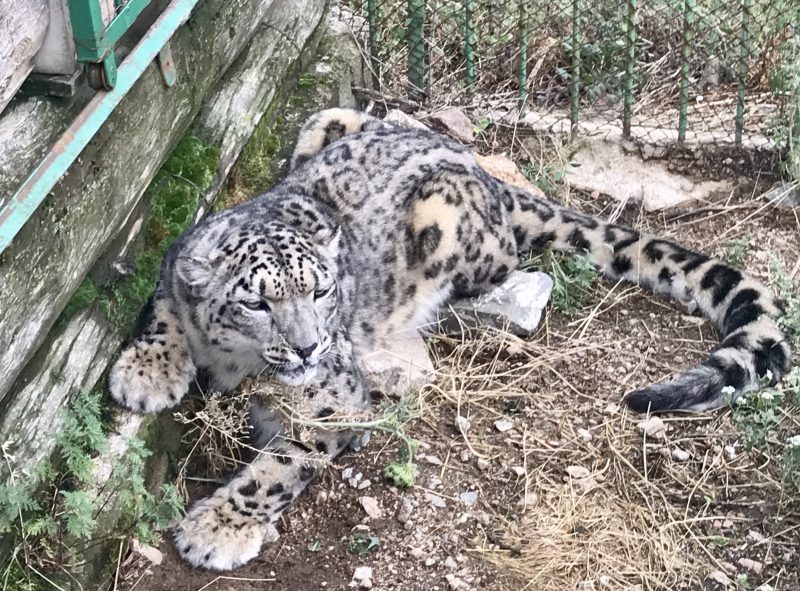 Snow leopards are majestic creatures whose numbers have been steadily declining.

In large part, the population is found in the mountains of Central Asia, with 350-400 snow leopards in Kyrgyzstan alone.

Unfortunately, they’re hunted for their fur or sometimes perish due to hazards in the wild or a lack of food.

The fine for killing a snow leopard is hefty and meant to serve as a deterrent.

The NABU Snow Leopard Sanctuary in Issyk-Kul was created in 2002 to help rescue, rehabilitate and if possible, re-release the animals into the wild.

The site is open to tourists but you need to call in advance.

It’s not easy to get here as it’s remotely located so it’s best to hire a driver.

There are also other animals being taken care of here like eagles and lynxes.

2. Dine with a Dungan family 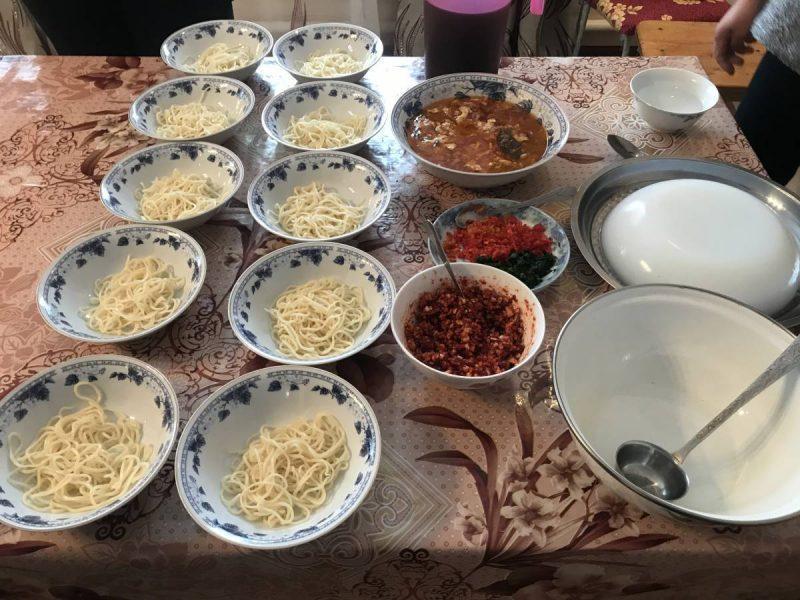 The Dungan people are a Chinese Muslim minority that fled persecution and settled in Kyrgyzstan in large numbers.

You can learn about their culture firsthand by having lunch or dinner in a Dungan family home.

The lunches come with 8 courses and 5-star hospitality. One of the best places for this activity is the city of Karakol.

RELATED POST: 10 BEST THINGS TO DO IN KARAKOL, KYRGYZSTAN 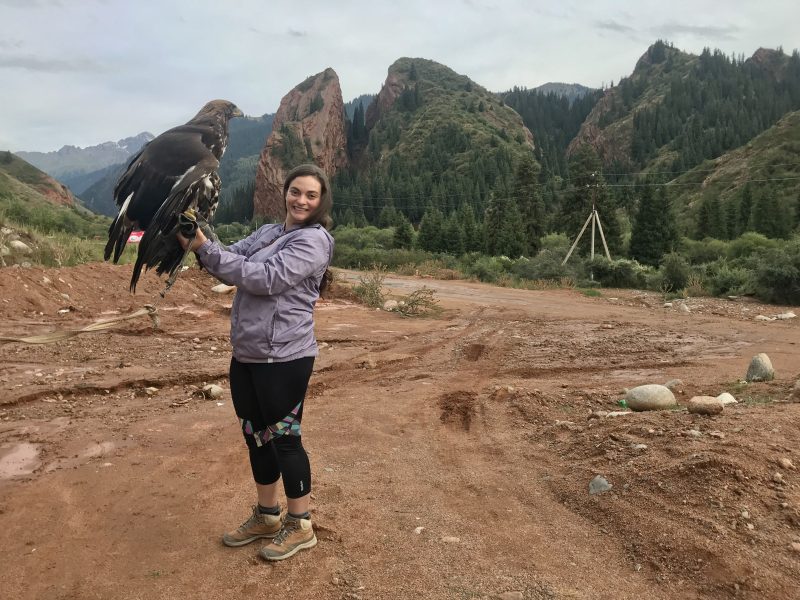 Jeti-Oguz is a village famous for its rock formations, including the “Broken Heart” and “Seven Bulls Rocks.”

This is a great place to pick up honey souvenirs as you won’t get them any closer to the source.

The bucket list adventure here, however, is getting to hold an eagle.

I’ve seen eagle demonstrations in the U.S. before and they won’t even let you get within 15 feet.

This is a singular experience, thanks to the expertise of the eagle trainers and hunters on site.

The birds are used to being around people so for a small fee, you’ll be able to hold one yourself.

If you pay extra, they’ll dress you in traditional Kyrgyz attire to boot. 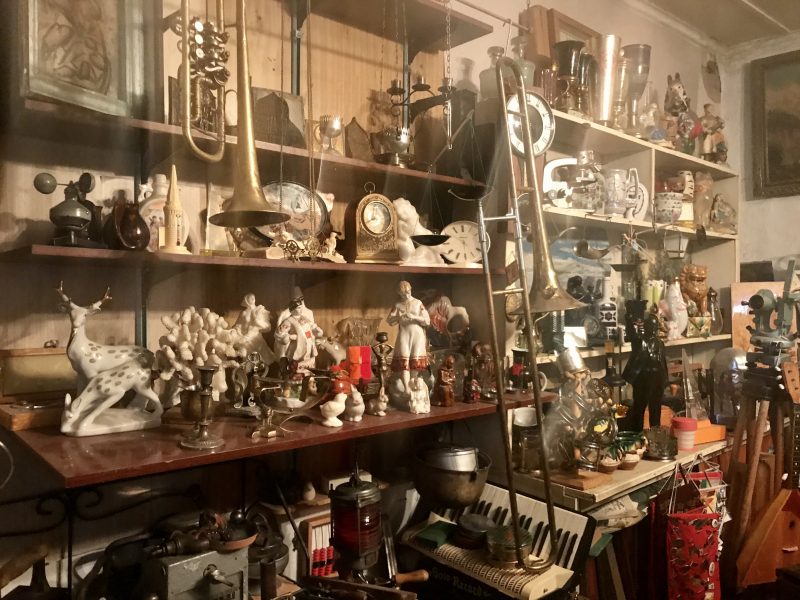 Kyrgyzstan used to be part of the Soviet Union and the Russian influences are apparent not just in the language, but in the art, music and food as well.

This is a great place to go hunting for Soviet souvenirs as a lot of items are well preserved and affordable.

The Antique Shop of Aleksandr Korablev in Karakol and the Tsum Center in Bishkek are two shops that should be on your radar. 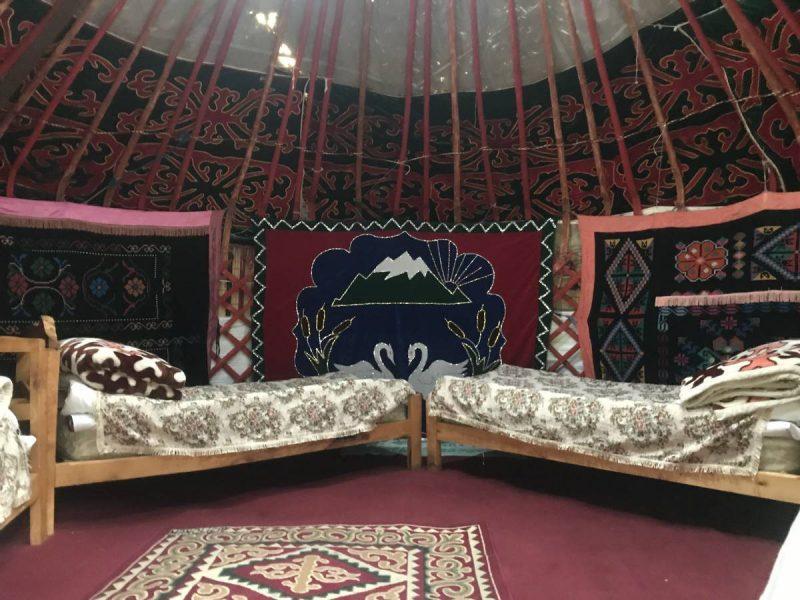 For many people, staying in a yurt is a far-off dream. For the Kyrgyz people, it’s a way of life.

The Kyrgyz are nomadic so yurts were their main form of shelter for centuries.

The structure is so integral to their culture that it is the main emblem on the country’s flag.

You can stay in yurts all over the country. Some are set up in the back of people’s homes; others are part of official yurt camps.

This is a more intimate experience than staying in a hotel and I recommend you try it for at least one night.

Be aware that hot water will be tough to find, as will electricity or generators generally.

In exchange, however, you get to socialize with a local family and other travelers and disconnect from your devices to truly enjoy your surroundings.

RELATED POST: 21 UNIQUE PLACES TO STAY ACROSS THE WORLD 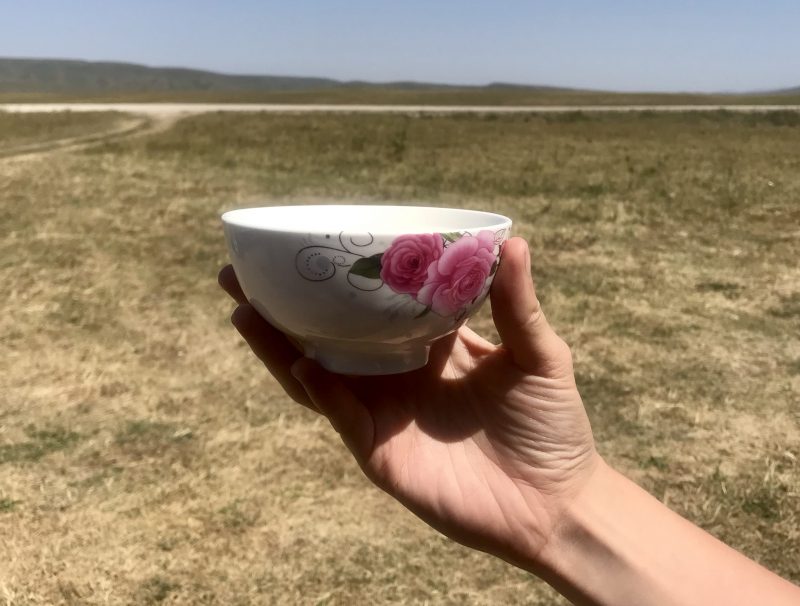 One thing you’ll see in Kyrgyzstan that’s uncommon in the states is the use of horse meat and milk.

Horse meat is a staple on any menu, right up there with pork, steak and chicken.

Horse milks is fermented and made into kumis, which is said to have medicinal properties.

You can try both when in Kyrgyzstan to see which one you favor. 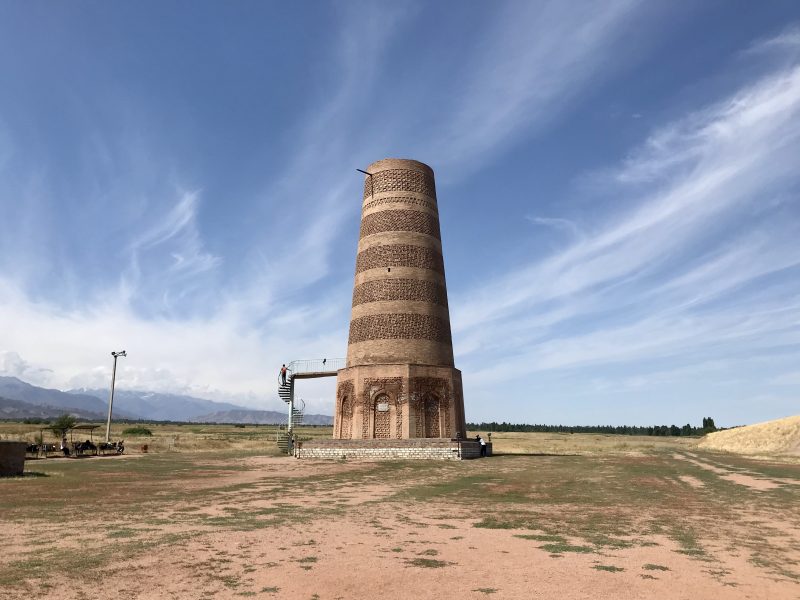 The Burana Tower is a popular stop on a road trip throughout Kyrgystan.

Legend has it a king built the tower to protect his daughter after it was predicted she’d die of a spider bite at 18.

Sadly, a spider snuck past the food inspectors (hiding in a grape) and got her anyway.

Centuries later when the Russians came they started taking bricks from the bottom of the tower, playing a dangerous real-life game of Jenga.⁣⁣⁣

Today, the tower stands at 25m (down from 45m) and has a steep and somewhat claustrophobic climb through the original passageway to reach the top, where you’re rewarded with a 360-degree view. 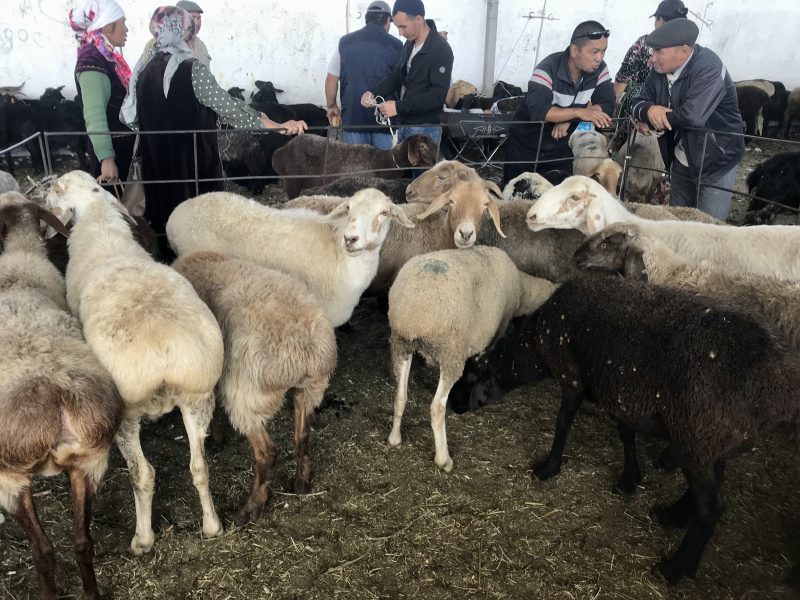 The TokMok Animal Bazaar is held every Sunday from 2am till 12pm, though by 10am it starts to wind down.

Herders gather to sell livestock, including sheep, horses and cows.

This particular bazaar borders Kazakhstan so many people attend but there are animal markets held elsewhere throughout the country, including Karakol.

You won’t find a more local experience and will likely be one of a handful of tourists there. 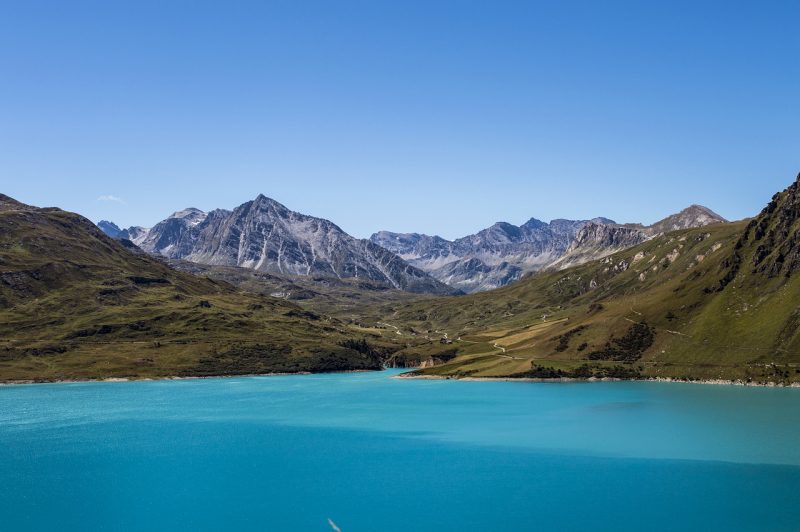 If you’re looking for an off the beaten path adventure where you’ll be rewarded with turquoise blue waters and untouched landscapes, then consider heading to Kol-Tor Lake.

This is a favorite spot for backpackers.

The Kol-Tor Lake trail is 4.6 miles each way and takes 3-4 hours hiking each way.

Expect to hike all day, around 9 hours if you include time to enjoy the lake once you get there.

If you want to take an extended tour there’s a 3-day option on horseback that takes you to Kol-Tor and Kol Ukok lakes. 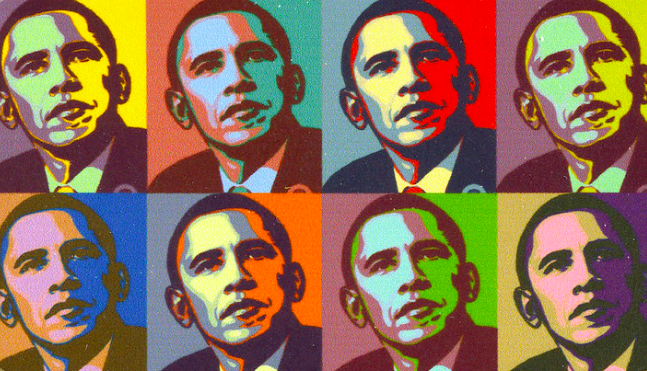 This isn’t the only Obama Cafe in the world, but it’s the first one I heard of and it’s certainly the last themed restaurant I expected to find in Kyrgyzstan.

Nevertheless, if you’re a fan of Number 44, then the Obama Bar & Grill in Bishkek is worth a stop.

The food is American-style, the waiters speak English well and they have vegan options available.

This is actually all pretty common in Bishkek which is a major city but the fact that you can dine with Obama smiling down on you is the differentiator and cherry on top.

I used to think dumplings were the bee’s knees, until I had a manty.

They’re a Central Asian version of a dumpling, somewhat fatter and using ample amounts of chopped fat to make them nice and juicy.

I took a many-making class at the Caravan Hotel in Karakol and was impressed by the nimbleness of my instructor’s hands.

She was able to fold a manty in seconds and make it look flawless; meanwhile mine ended up like shapeless globs that were shoved to the bottom of the slow cooker when picture time came around.

Either way, this is a fun activity to taste the local cuisine and come away the knowledge of how to do it yourself.

If you’re looking for what to do in Kyrgyzstan, I suggest mixing it up. The perfect blend of adventure, food and culture await you in this one-of-a-kind destination.

RELATED POST: BEST THINGS TO DO IN ALMATY, KAZAKHSTAN

*This publication is made possible by the support of the American People through the United States Agency for International Development (USAID) Competitiveness, Trade, and Jobs Activity in Central Asia. The contents of this publication are the sole responsibility of Jen on a Jet Plane and do not necessarily reflect the views of USAID or the United States Government. 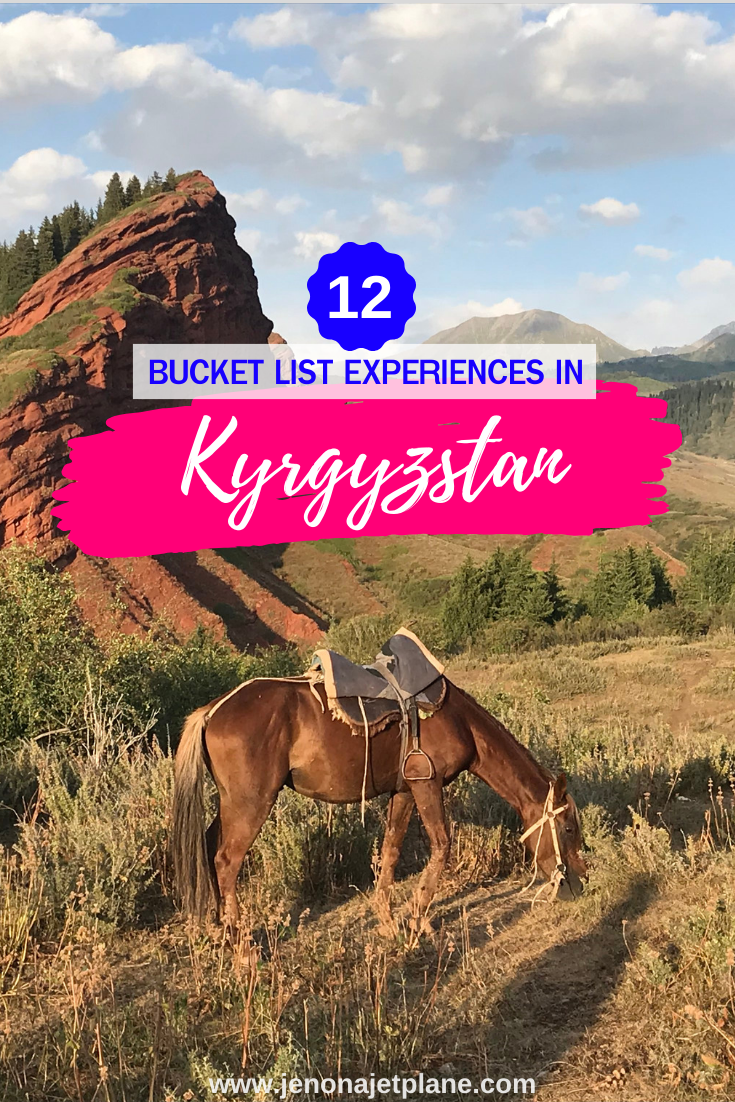 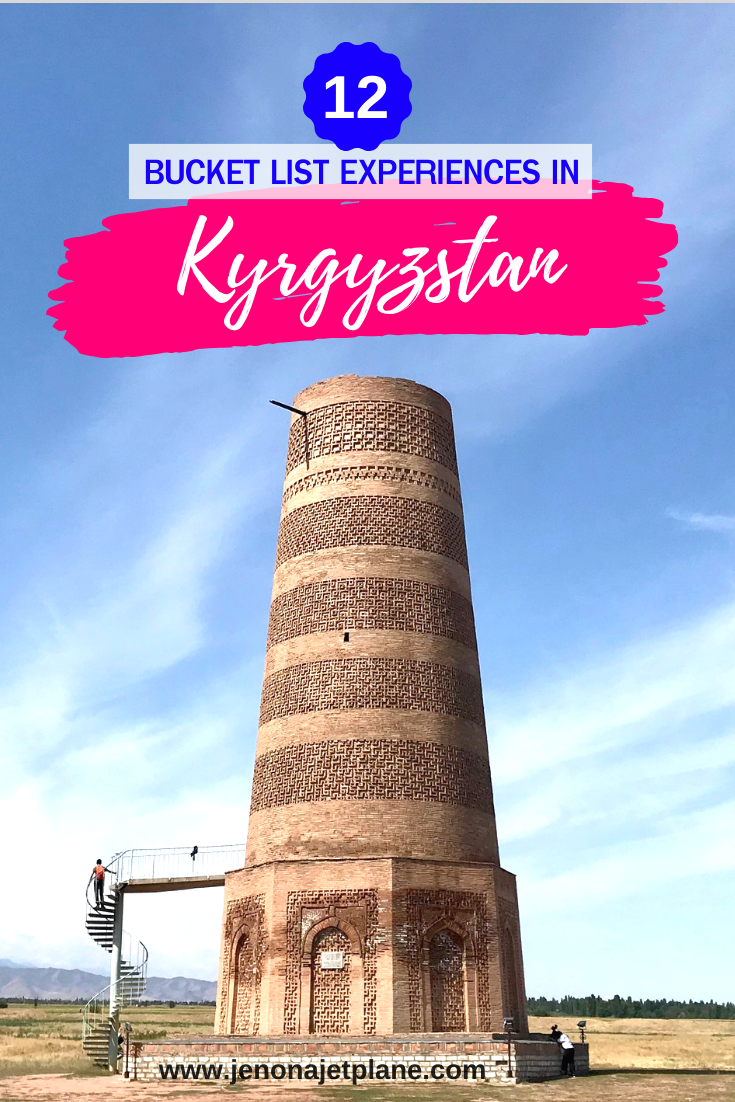 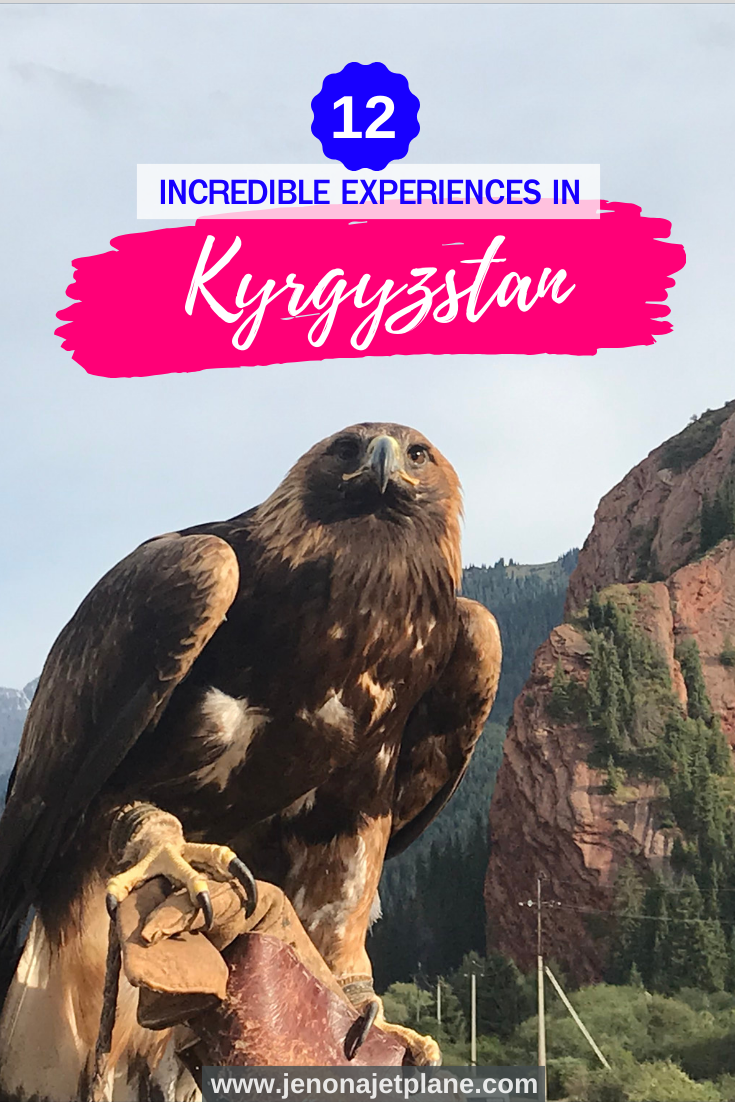 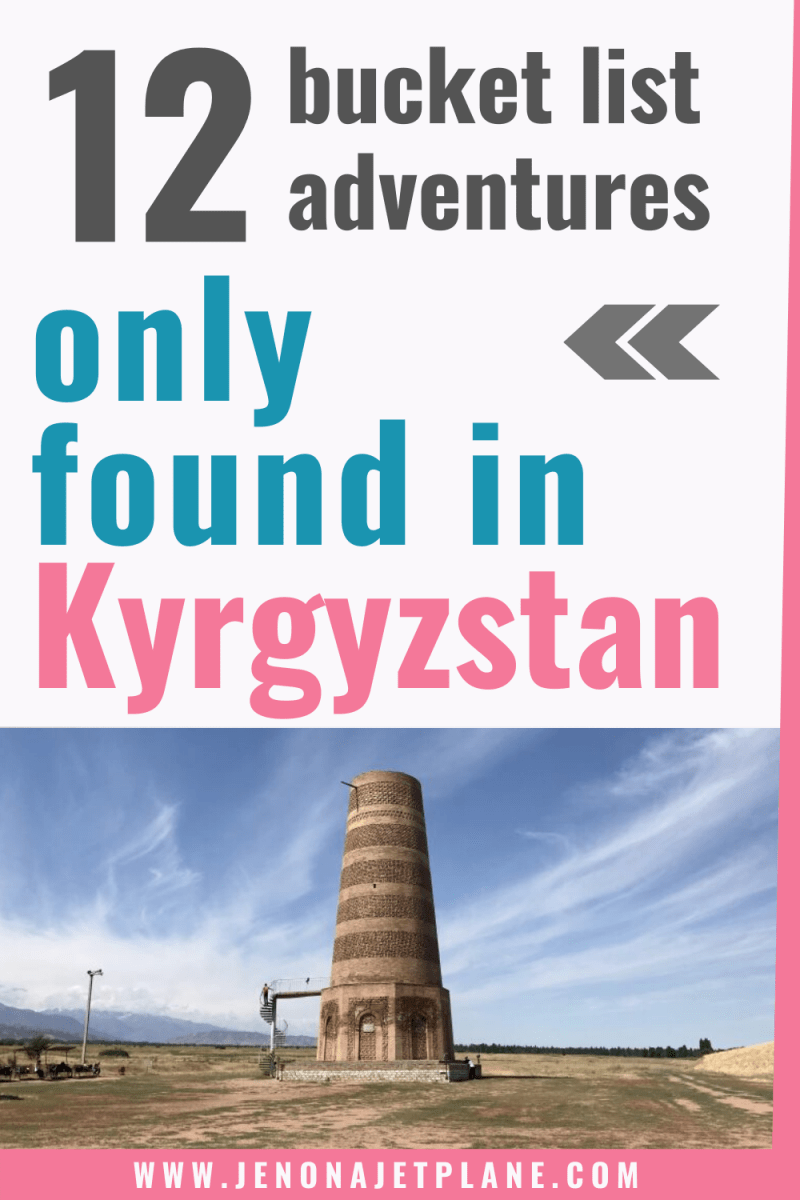 I love this outdoor activity. I always have a dream to ride a horse in this place, but I always don't have a chance to visit this place. Horse riding on this place is perfect.