There is so much art in Florence, Italy that it’s hard to know where to begin.

Your itinerary should undoubtedly include an evening at the opera, but prioritizing which museums to see is a difficult task, especially considering that the crowds in Florence make any experience at least an hour longer than anticipated and advanced reservations are not just recommended, but realistically required.

Should you get a Firenze card in Florence?

The best way to see everything in Florence during a short period of time is to invest in the Firenze Card. It’s 72 Euro for 72 hours and gets you into most museums in the city, and you get to skip the line.

This is well worth it if you’re in a hurry or traveling to Florence in the summer and you actually pay less for the card than you would for admission outright if you go to the museums listed below and the city’s main churches.

You can only get a Firenze card from authorized vendors at specific locations, and hours vary by location.

Only a few offices are open on weekends, something to keep in mind if you’re arrive on a Saturday or Sunday. The office at Santa Maria Novella is one of the main offices and might be your best bet.

You need to go in with a plan, so to help you stay organized I’m putting together the ultimate Florence art checklist.

These are the most famous and influential pieces in the city, so don’t leave Firenze without taking the time to visit these masterpieces!

1) The Statue of David 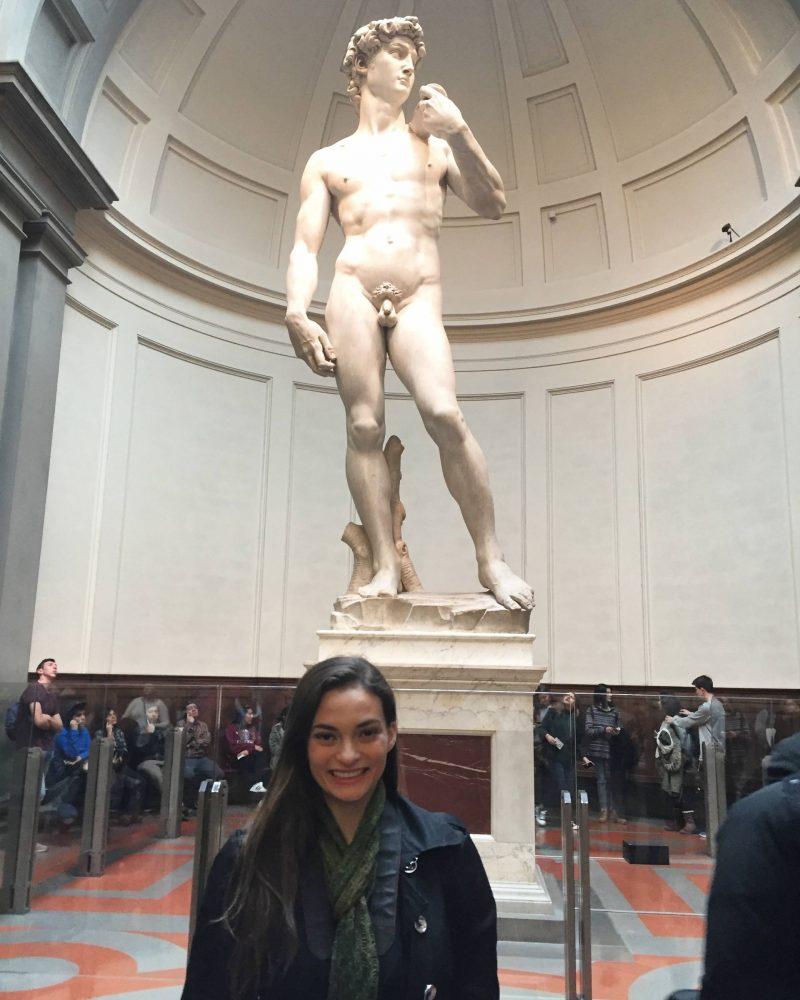 The first stop on any trip to Florence should be the Accademia Gallery, where Michelangelo’s legendary Statute of David is found.

It was originally displayed in the Piazza della Signoria but had to be moved indoors in 1873 to protect it from weather damage. A replica now stands in the Piazza.

Unfortunately, David hasn’t been completely free from harm in his new home. In 1991, a deranged man with a hammer broke part of David’s toe. There is now a 5-foot high glass barrier surrounding the work of art, but you can still get a 360 degree view. Go early in the morning for your best bet of a clear shot.

Firenze cards aren’t sold here so if you’re opting to go with the 3 day, 72 Euro pass you have to make sure to pick it up before heading to the museum. Firenze card holders and advanced ticket holders both enter the same line here.

Make reservations for your Accademia Gallery tickets in advance, do not buy them on site if you want to avoid the lines.

Opt to use the free Rick Steves audio guide here, which you can download straight to your phone through the app. It saves you 6 Euro on the museum guide and is much more entertaining. 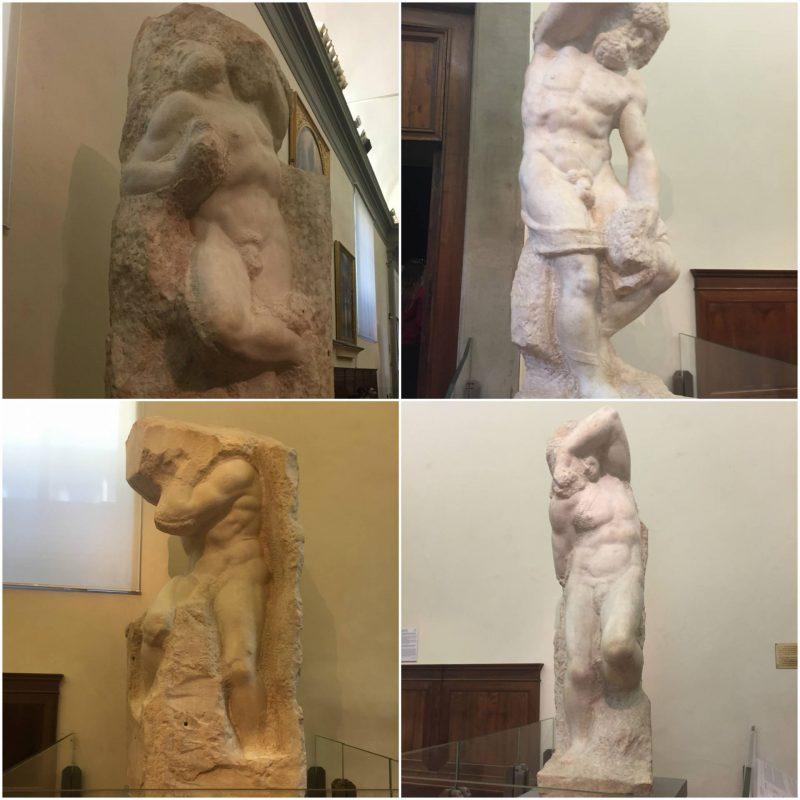 Michelangelo’s Prisoner’s is a series of 4 sculptures depicting human forms breaking out of the marble. Pictured from the top left are The Awakening Slave, The Bearded Slave, The Atlas and The Young Slave. Some speculate that Michelangelo purposefully left the statutes unfinished to represent humans trying to break free of their material trappings.

More likely, these statues are a result of failed commissions and were kept in their unfinished state due to fiscal constraints. It’s much more poetic to think about all the statues represent, however, regarding entrapment, freedom and pent-up energy. They also are the perfect embodiment of Michelangelo’s famous quote, “I saw the angel in the marble and carved until I set him free.” 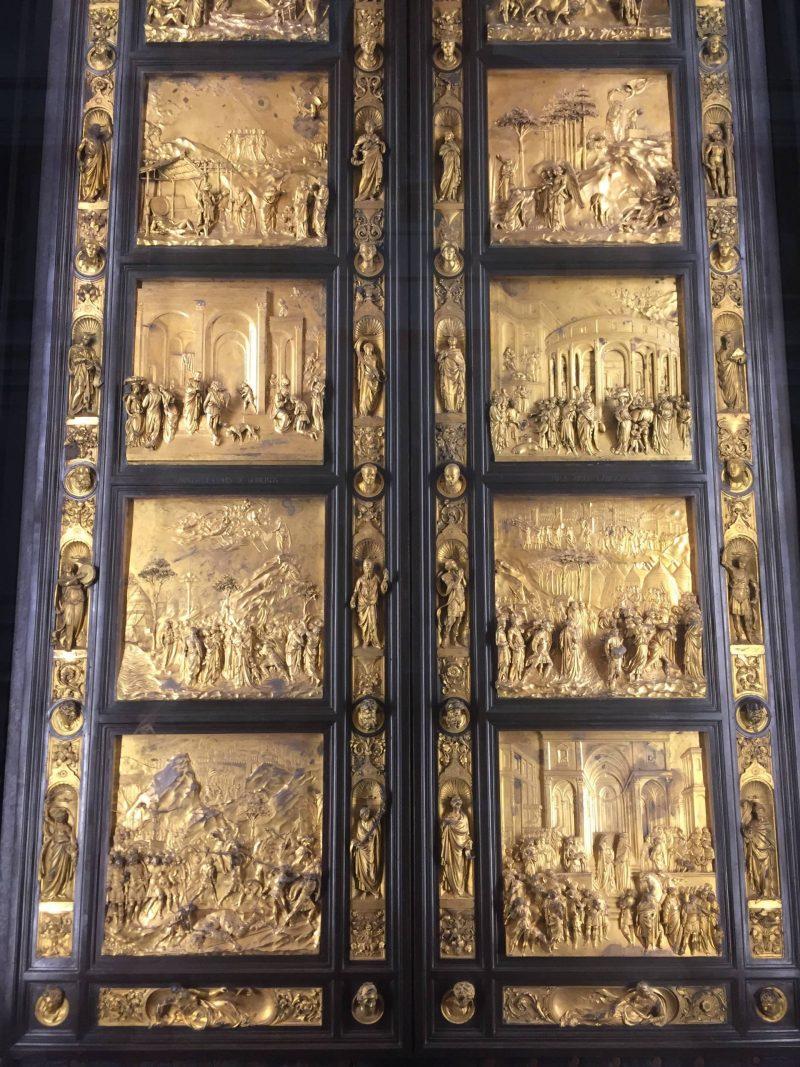 Lorenzo Ghiberti created the Gates of Paradise in the mid-15th century to decorate the east entrance to the Duomo Baptistery. Today, replicas stand in its place at the Baptistery and the originals are in the Museo dell’ Opera del Duomo, located just down the block. The gates are made of bronze, stand at 16.6 feet tall and weight approximately 3 tons.

There 10 panels, each displaying a different scene from the Bible. In Ghiberti’s age, sculptures and artwork were a way of education the illiterate and sharing the Bible’s stories.

When Michelangelo first laid his eyes on these doors, he said they were fit to adorn the gates of heaven itself, and Ghiberti’s masterpiece has been regarded that way ever since. Art lovers who see it for the first time are sure to agree. 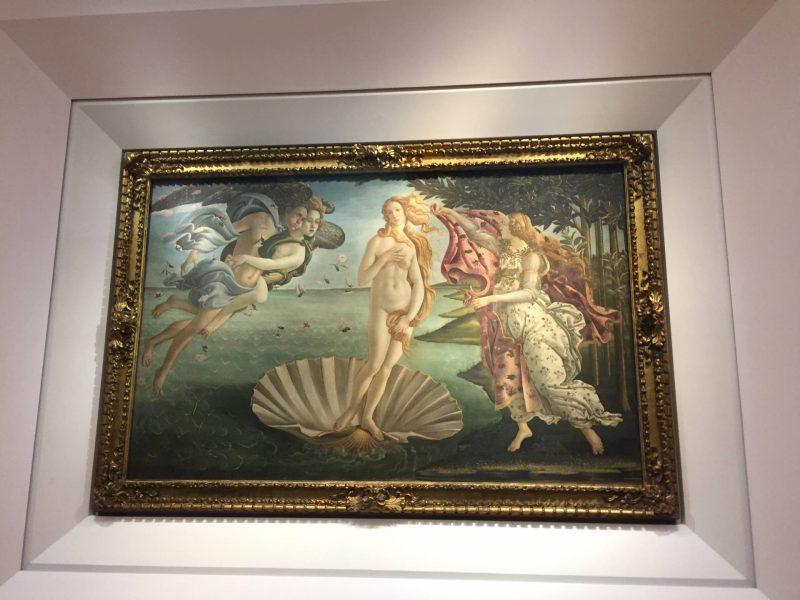 Sandro Boticelli’s Birth of Venus is one of the best known paintings in the world. According to myth, Venus was born from the foam of a wave. She floats ashore on a clamshell where her maid waits to dress her, as Mr. and Mrs. Wind intertwined next to her blow her hair to the side. Her body is not sensual, but innocent because Boticelli thought the bare form was a way of appreciating God. Boticelli’s use of pastels in this piece is meant to evoke a feeling of springtime and renewal.

The face of Venus in this painting has been replicated countless times. On a stroll back to my AirBnB in the Duomo area, I came across this incredible piece on the street, created with chalk that very same day! The level of talent in Florence is off the charts.

Want $40 off your first AirBnB rental? Book through this link! 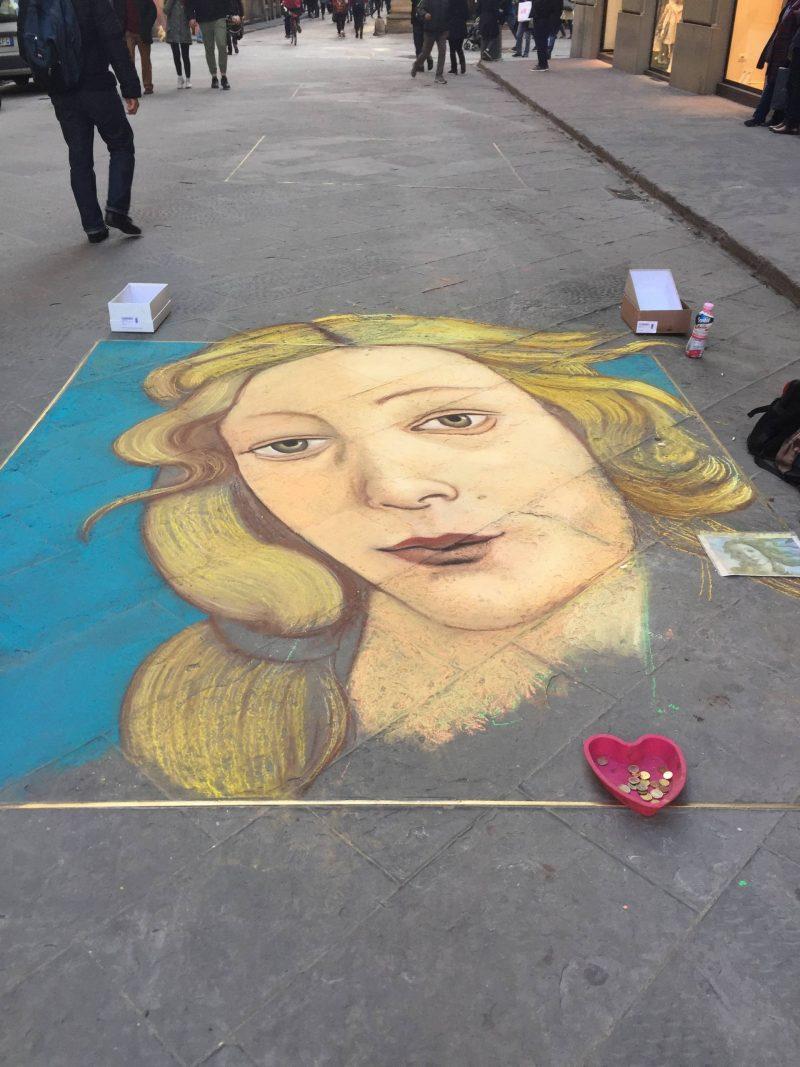 The Birth of Venus is one of the most visited works of art on the second floor of the Uffizi, rivaled mainly by the Venus de’ Medici housed just down the hall. You’ll have to battle dozens of people and tour groups just to get a full view so it’s better to go later in the day, right before closing. Make sure you download the Rick Steves free audio guide for the Uffizi. Again, it’s much better than the 6 Euro option offered by the museum, and you can’t beat the price! 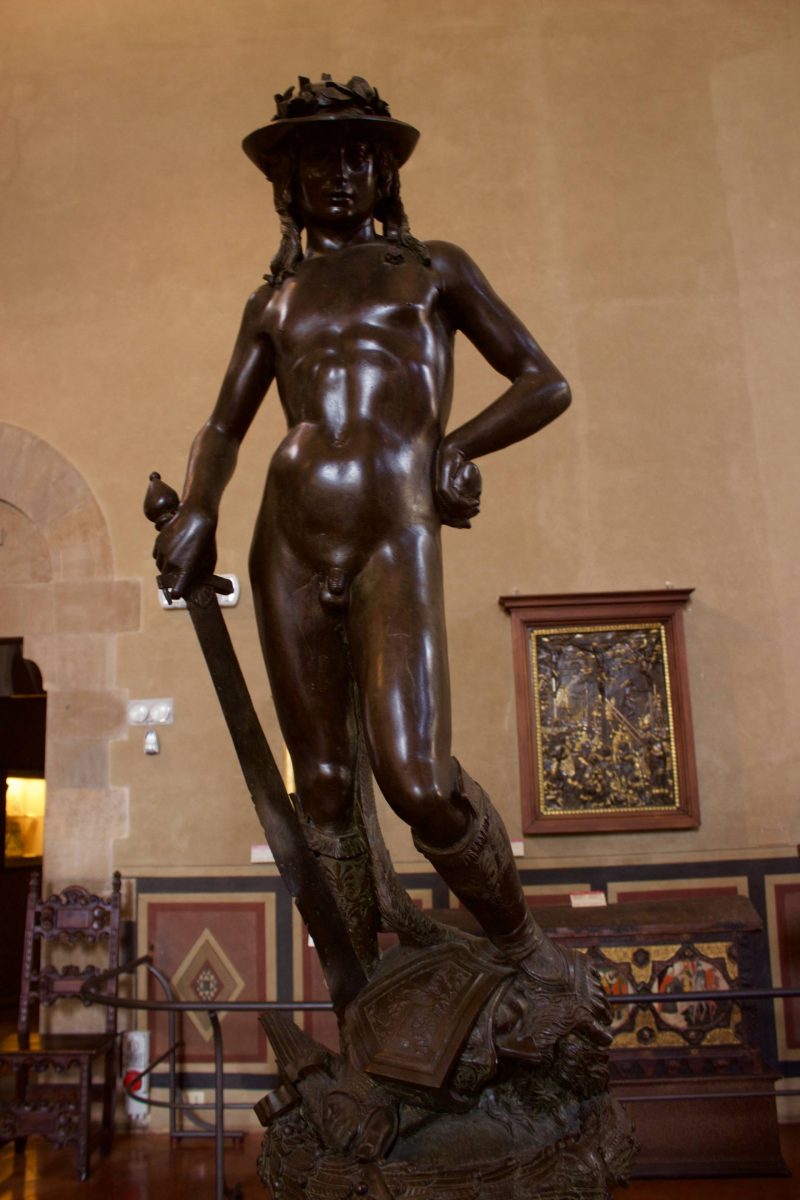 There are many statues of David throughout Florence. The character is significant to the city as he symbolizes liberty and the freedom of Republican ideas. Florence was not always a Goliath on the world scene and had to fight valiantly to preserve its standing as the birthplace of the modern Renaissance. Donatello’s David, carved before Michelangelo’s, is made of Bronze and can be found at the Bargello Museum.

One interpretation of the statue, and the reason for it’s risqué label, is the feather from the slain Goliath’s helmet. Look closely and you’ll see reaching up David’s right leg, towards his groin. It has been said that the statute symbolizes and secretly condones homosexuality, a sin of the highest level at that time. For those reasons, I love this statue and am actually hoping Donatello was gay and left secret hints all over artwork commissioned by those with homophobia. 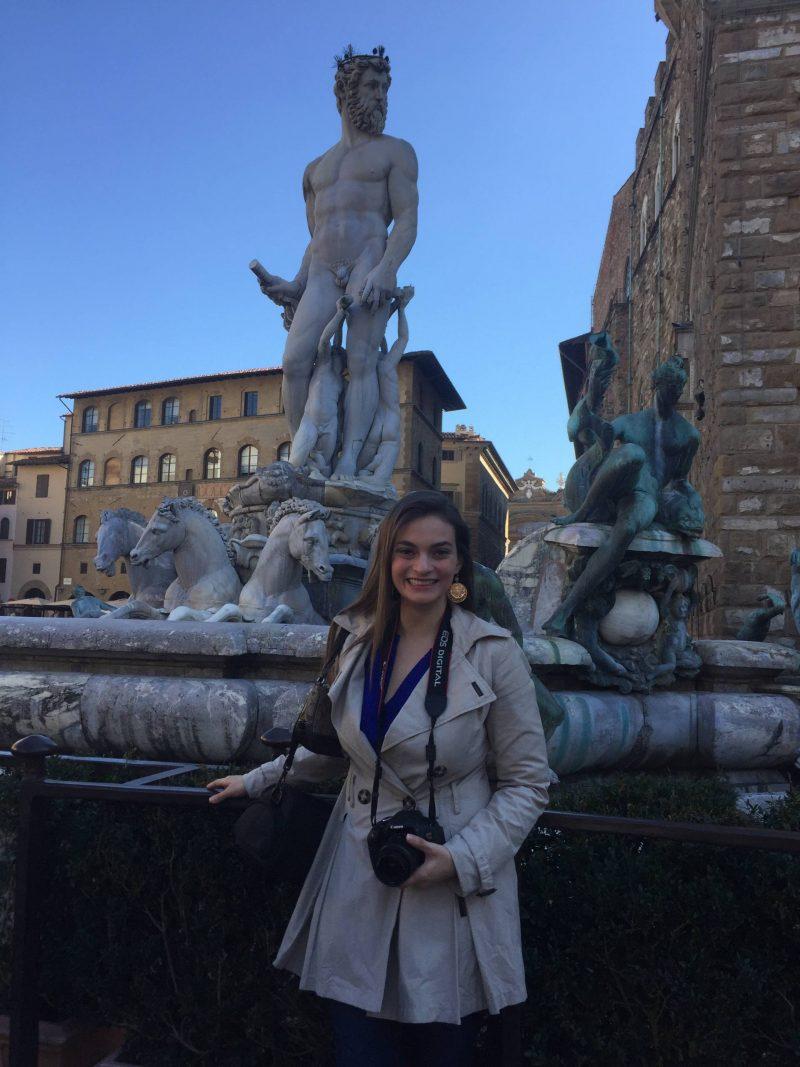 Commissioned by the Medici family and built by sculptor Bartolomeo Ammannati, the massive Fountain of Neptune stands in the middle of the Piazza della Signoria, in the center of the city. The face of Neptune in the center is modeled after Cosimo I de’Medici to allude to Florence’s dominion over the sea.

Like Michelangelo’s David, the fountain has not been free from harm. One satyr was stolen in the 1800s and recently, in 2005, vandals climbed the statute of Neptune and cut off his hand. Since then, security in the area has increased significantly and guests have to take pictures from beyond a barrier to the fountain. 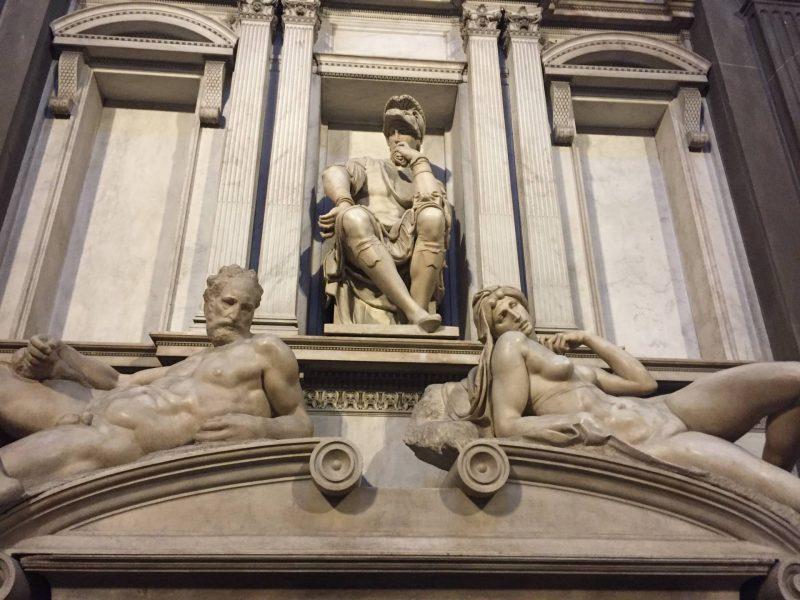 While it’s a little creepy to walk into the Mausoleum of the Medici family, this is the best place to find Michelangelo pieces, so I sucked it up. Also, when I went there was free admission. In fact, every February 18th admission is free to commemorate Anna Maria’s birthday, the last member of the medico family. Typically celebrations include a morning procession in her honor.

There are two tombs of interest here–those of Giuliano and Lorenzo de’ Medici. The tomb of Lorenzo (pictured above) shows him in the middle in a pensive position. He is meant to represent the contemplative life, and Michelangelo took great pains to sculpt a face that would always remain in shadow. To his left lies dawn, as if awaking from her slumber, and to his right lies dusk, dawn’s masculine counterpart.

Compare this with the tomb of Lorenzo’s cousin Giuliano, which features night and day as figures on either side of the Medici prince. They are contorted in impossible positions. Giuliano himself is meant to look like the standard of beauty, with an exaggerated long neck and stance that symbolizes an active lifestyle.

Night and day, dawn and dusk–those are the ways we mark the passing of time. They are the very forces that erode our lives and yet they look melancholy themselves, as if almost unable to bear the weight of their burden.

The mausoleum is unfinished, but it’s said that architecture itself is meant to evoke a feeling of purgatory, with blind windows and more perfect shapes and concentric circles approaching the top. Apparently, with regards to the Medici, Michelangelo felt they may get out or they may not. 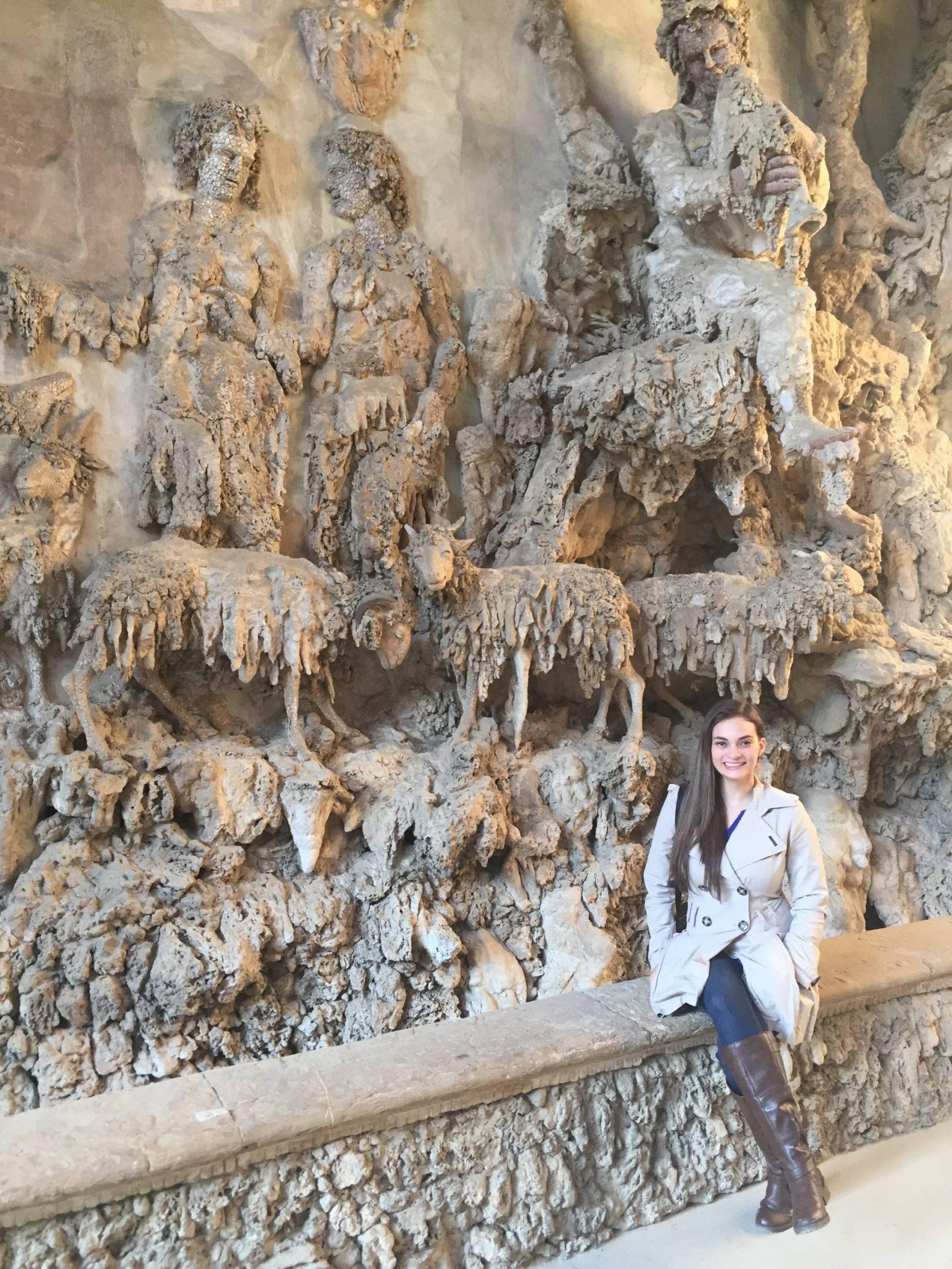 Fans of Dan Brown’s Inferno will recognize this grotto, found in the Boboli Gardens behind the Pitti Palace. The gardens itself are stunning to tour and have endless delights for photographers and art fanatics. But the Bountalenti Grotto, which opens to the public only once per day at 3:30pm, is a truly impressive sight.

There are three chambers. The first, and the one most readily visible while you’re trying to take pictures from outside the gate, consists of wall and ceiling frescoes by Bernardino Poccetti. It’s meant to create the illusion of a natural grotto, a refuge for shepherds to protect themselves from wild animals. It originally housed Michelangelo’s prisoner’s before they were moved to the Accademia.

The second chamber contains a statue of Paris and Helen by Vincenzo de’ Rossi. The third and furthest chamber in the grotto houses Giambologna’s famous Bathing Venus. There are rumors of romantic rendezvous here between Medici members and their secret lovers. Also, if Dan Brown is correct, there is an entrance to the Vasari corridor hidden at the end of the third chamber.

These are some of the most famous works of Florence art, but this is by no means an exhaustive list. Get your fill of art in the city that gave birth to beauty. Do you want a free 4-day Florence itinerary to help you see all the best sites the city has to offer with none of the prep work? Click here.

Until next time, safe travels! 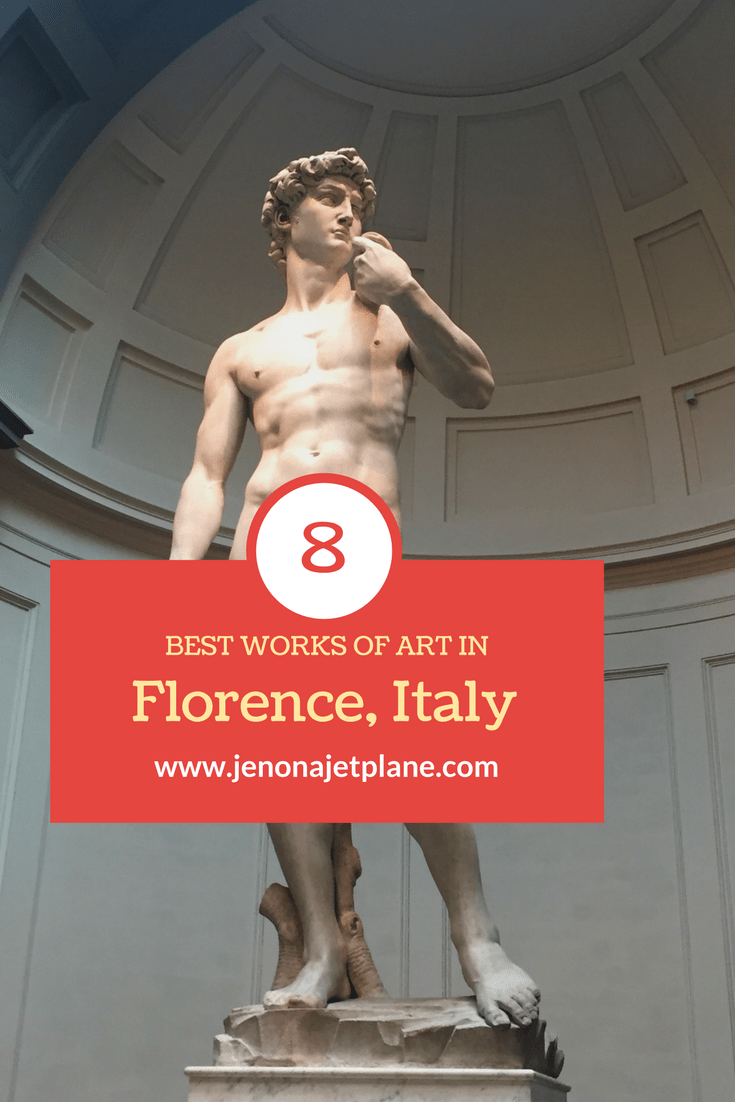 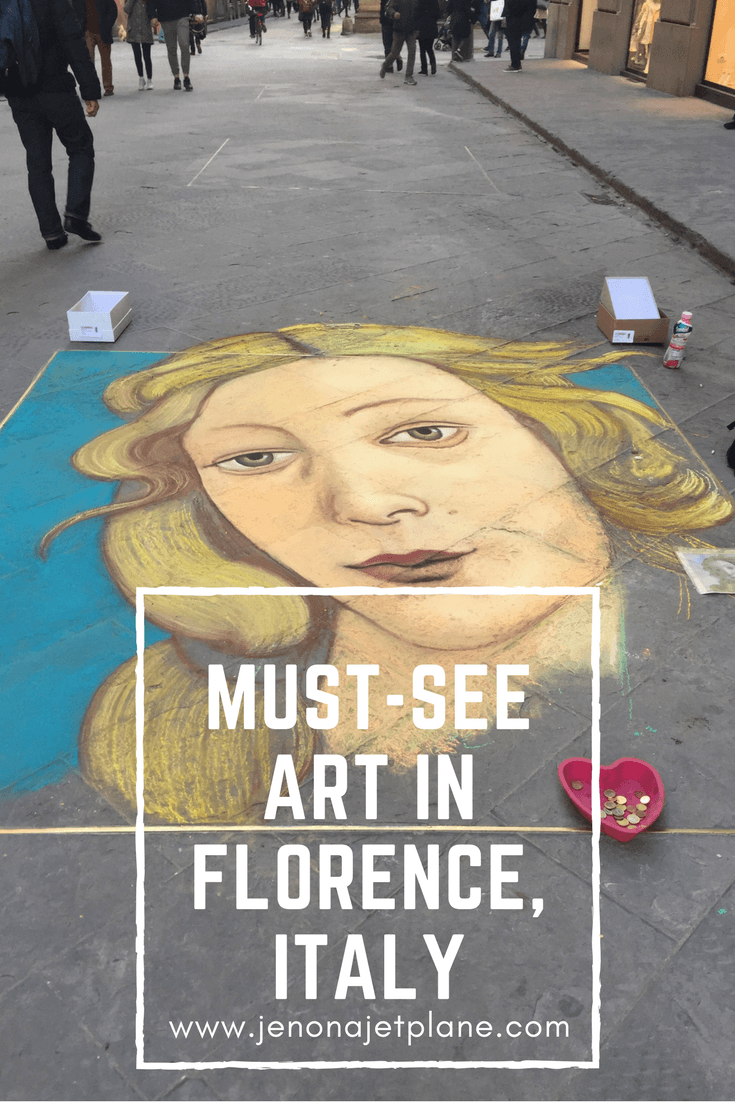 How many of these can be seen from an electric wheelchair?

Quite a few! the cobblestone streets may not be the smoothest ride but the museums are accessible and have elevators. The challenge might be parts of the Duomo due to old construction. Otherwise, highly encourage a trip. Check out my friends site, Curb Free With Cory Lee, for more!

Florence is on my bucket list of places to visit and seeing the art is one of the biggest highlights for me. Thanks for all the tips!

Florence is so beautiful. Surprised no one attacked you for taking a photo of the statue haha

Florence is next on my travel plans ! I'll definitely check this article again when I go !

So close to art and the work of some great people who lived in this world. History is important and exciting, one can spend a good amount of time looking at these wonderful creations.