I recently visited the Wright Brothers National Memorial in North Carolina and was seriously moved.

It was a full circle moment for me, the founder of Jen on a Jet Plane, to go to the birthplace of flight.

It is thanks to the tireless work and research of Orville and Wilbur Wright that I can see the world, and the Wright Brothers National Memorial was a great place to appreciate all they’ve done for aviation.

If you’re traveling to the Outer Banks, I highly recommend you add this site to your itinerary.

Here’s what you need to know to plan a visit.

RELATED POST: UNUSUAL THINGS TO DO IN THE OUTER BANKS

Where is the Wright Brothers Memorial located? 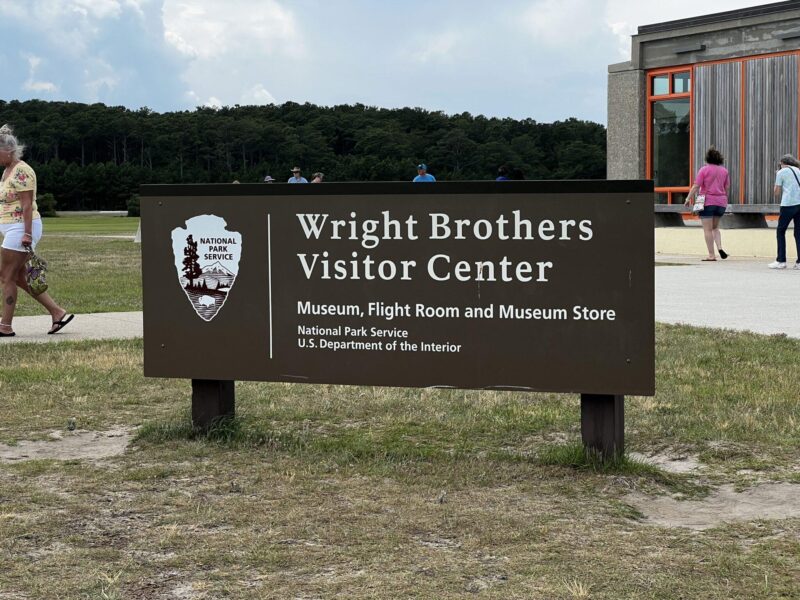 The Wright Brothers National Memorial is in Kill Devil Hills, North Carolina. It is part of the Outer Banks, a set of barrier islands on the coast of North Carolina.

You may wonder why the memorial is here instead of in Ohio, where the Wright Brothers grew up.

The Wright Brothers came to North Carolina in 1903. They were in search of a place with the right wind patterns to test their flying apparatuses. The wind patterns in Kitty Hawk were ideal.

Moreover, the sand dunes in the area provided them with a cushion to ensure a soft landing while perfecting their method.

In a letter to his sister, Orville Wright wrote, “Ee came down here for the wind and sand, and we have got them.”

Do you have to pay to see the Wright Brothers Memorial? 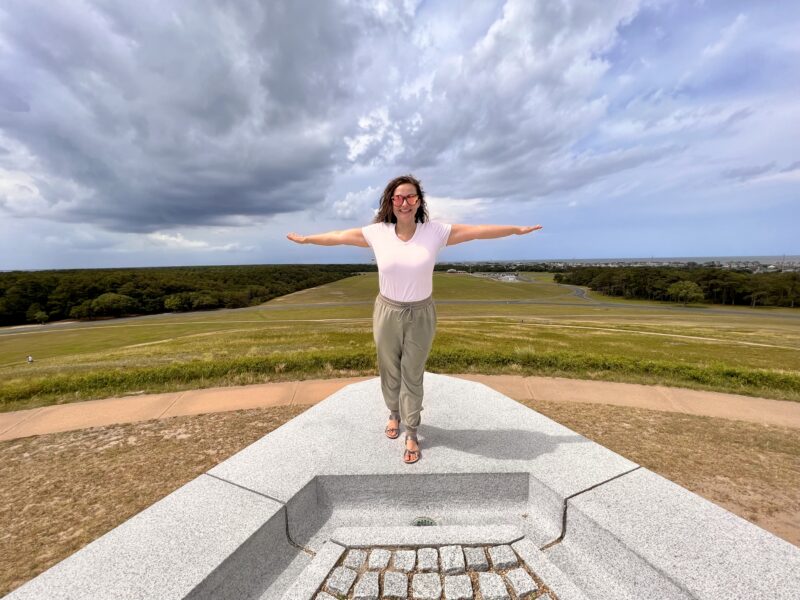 The Wright Brothers National Memorial is part of the national park service.

It costs $10 per person to enter. Children 15 and under are free.

If you have a national park pass, you get free admission.

There are also free admission days throughout the year, including:

Finally, if you have a student in the 4th grade, you and your family can visit national parks for free as part of the Every Kid Outdoors initiative.

The site is generally accessible, with a ramp at the front of the building, accessible parking spots, and wheelchairs available for check out.

What happened at the Wright Brothers Memorial? 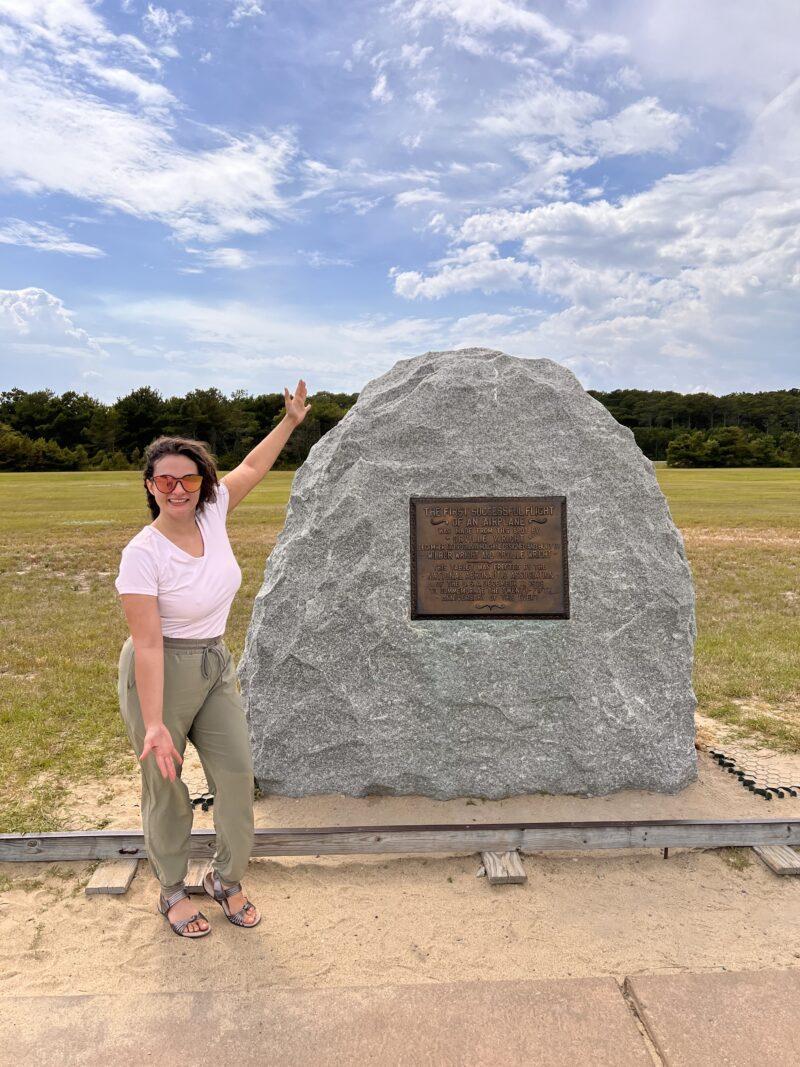 The Wright Brothers National Memorial is commemorating one very important feat — this is the site of the first successful powered flights which took place on December 17, 1903.

There were four flights total, each marked by a different commemorative boulder at the exact spot the Wright Brothers landed.

Here is a summary of the 4 flights:

What is there to see at the Wright Memorial? 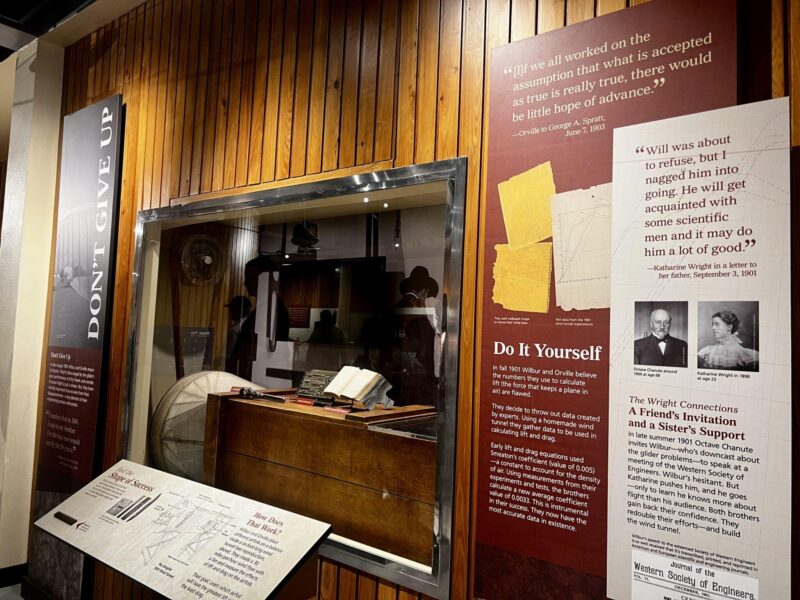 In addition to the commemorative boulders and flight path, there is a museum in the Visitor’s Center that chronicles the brothers’ lives.

The brothers had a happy childhood and well functioning family. They were inspired by Otto Lilienthal, a German known as the “flying man.”

The museum does a good job of showing the path of discovery the Wright Brothers took through trial and error. It also teaches the basics about flight and has interactive elements for children and adults alike.

A star of the exhibits is a full-sized replica of the 1903 flyer — the original is at the National Air & Space Museum in Washington, DC.

In addition to the museum, there is a replica of the hangar the brothers used with some educational placards and materials throughout.

There’s a free 30-minute guided tour by the park ranger held 3 times a day and included in your price of admission.

Tours take place at 10am, 1pm and 3pm and meet in the back of the visitor’s center.

Is there a restaurant at the Wright Memorial?

There is no restaurant or cafe at the Wright Memorial, but there are several within driving distance.

For a healthy breakfast or brunch, check out Fresh Fit Cafe. They can accommodate dietary restrictions like vegan or gluten-free. They’re also locally owned and open early, starting at 8am.

For lunch, consider going into Manteo. Poor Richard’s Sandwich Shop is open from 11am to 3pm and makes a mean Italian sub.

If you’re looking for a nice dinner spot, consider The Blue Point in Duck. Reservations are needed but this waterfront spot is sure to impress.

What’s on top of the Wright Brothers Memorial? 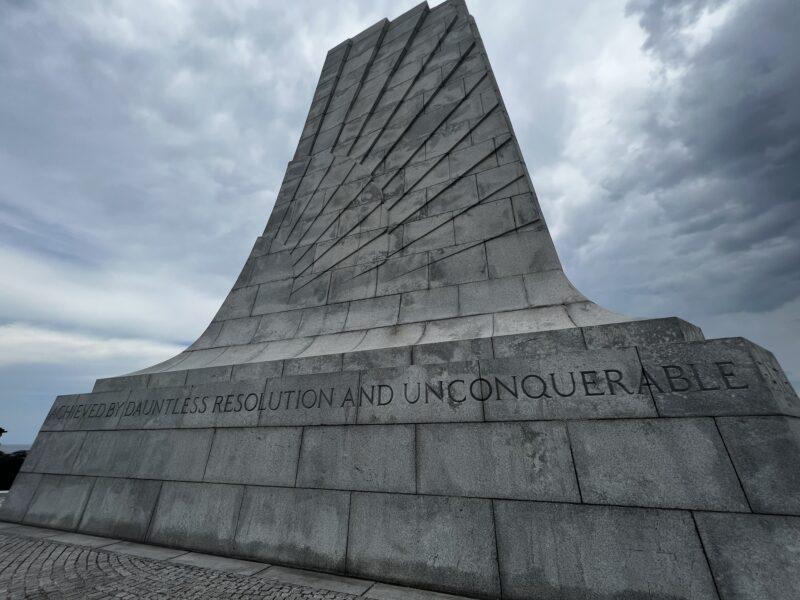 There’s a giant monument on the top of Big Kill Devil Hill that you can’t miss.

It’s 60-feet-tall and made of granite. It was erected in 1932, while Orville Wright was still alive.

It’s meant to be larger than life, an homage to how large a feat the Wright Brothers accomplished in doing what no one thought man could.

Inside, the monument is hollow. There are two alcoves where busts of the brothers used to be, but they’ve since been moved outside.

The view from inside the monument is the single highest point in the Outer Banks. It is closed to the public, although they open it occasionally for special events.

Every year on December 17th they have a party celebrating the anniversary of the first flight, and appearances have been made by public figures like Buzz Aldrin and President Bush.

What I found especially poetic was that while I was there, giant birds of flight were circling overhead, almost as if to honor the visionaries of flight themselves.

What other flight-related experiences are in the area? 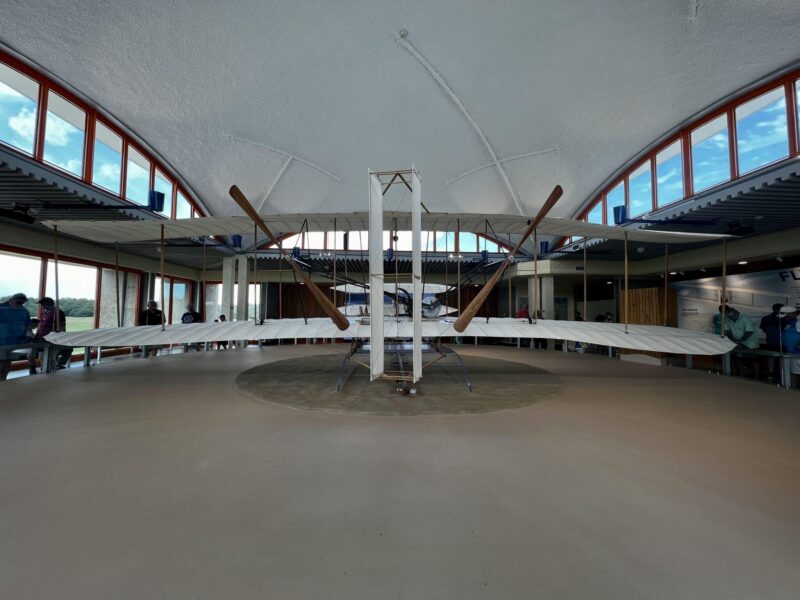 Looking for other ways to experience flight in the Outer Banks?

Consider hang gliding with Kitty Hawk Kites. You go on sand dunes and are only in the air for 10 seconds or so, making it a light adventure activity.

Another option is to take a classic biplane ride with OBX Airplanes. It has an open air cockpit and views for days.

While on the hill at the monument, we saw a biplane flying overhead and everyone stopped and stared.

Note, this post was sponsored by Visit Outer Banks. All opinions are my own.